Very little is known about the influence of specific microenvironments on exposure to air pollution in low- and middle-income countries such as India. To overcome this lack of data, an international team led by the Barcelona Institute for Global Health (ISGlobal), a centre supported by the ”la Caixa” Banking Foundation, carried out a study in peri-urban India that marked the first application of an innovative methodology: wearable cameras used in combination with personal air pollution monitors.

Wearable cameras have recently been used in health studies to assess physical activity, nutrition and green spaces. Now, for the first time, this technology has been used in combination with measurement sensors to identify drivers of exposure to air pollution.

The study, published in Environment International, formed part of the ISGlobal-coordinated CHAI project. The data used in the study were collected by 45 people living near the city of Hyderabad, India. For six non-consecutive 24-hour sessions, participants wore a chest-mounted wearable camera and a personal monitor to measure exposure to PM2.5 (fine particulate matter with a diameter smaller than 2.5 μm). 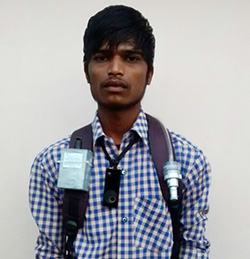 One of the participants in the study, with the portable camera and the air pollution monitor

“The cameras took a photograph approximately every 35 seconds, collecting more than 286,000 images in total. Our team then categorised the settings and activities shown in each image”, explained Maëlle Salmon, lead author of the study.

The findings showed that men had slightly higher daily mean PM2.5 exposure (43 μg/m3) than women (39 μg/m3), although both values were considerably higher than the daily safe limit established by the World Health Organisation (10 μg/m3).

Men had higher exposures for most visual concepts, including those related to presence in the kitchen, where biomass cooking fuel is used. “Although the men were not actively cooking, their high exposures for kitchen-related visual concepts could be explained by the fact that they spent time in this microenvironment while cooking was taking place, for example, immediately before mealtime,” explains Salmon. “In contrast, women spent time in the kitchen even when cooking was not taking place.”

For both sexes, the visual concepts associated with the highest pollution levels were smoking, biomass cooking unit, fire (visible flame or smoke) and presence in the kitchen.

ISGlobal researcher Cathryn Tonne, who coordinated the study and leads the CHAI project, commented: “The results indicate that the wearable cameras identified a wide range of activities and settings associated with exposure to air pollution that are difficult to identify using other methodologies.” Wearable cameras, Tonne added, are “particularly useful for identifying microenvironments that generate the highest exposures”.

Cathryn Tonne: Research on the Cardiovascular Effects of Air Pollution

When, Where and What? Measuring Personal Exposure to Air Pollution in India