A new study, led by the Barcelona Institute for Global Health (ISGlobal)—a centre supported by the ”la Caixa” Banking Foundation—has developed and externally validated a conceptual model of the dyspnoea-inactivity vicious circle in patients with chronic obstructive pulmonary disease (COPD). According to the World Health Organisation, COPD is the third leading cause of death worldwide. This new study is the first to develop a model of the vicious circle theory in this disease.

Previous descriptions of this process were based on expert opinion, clinical observations and cross-sectional studies. However, the theory had never been validated prospectively in accordance with the scientific method.

“No one had ever stopped to check whether this was true, so that’s exactly what we did,” explained Judith Garcia-Aymerich, coordinator of the study and head of the Non-communicable Diseases and Environment programme at ISGlobal. The researchers analysed direct and indirect relationships over time among multiple variables involved in this health problem, including airflow limitation, lung hyperinflation, dyspnoea, physical activity, exercise capacity and disease exacerbation.

“We have transformed a very widespread intuition into a relationship among various concepts and we have validated the resulting construct—our proposed conceptual model,” commented Garcia-Aymerich. 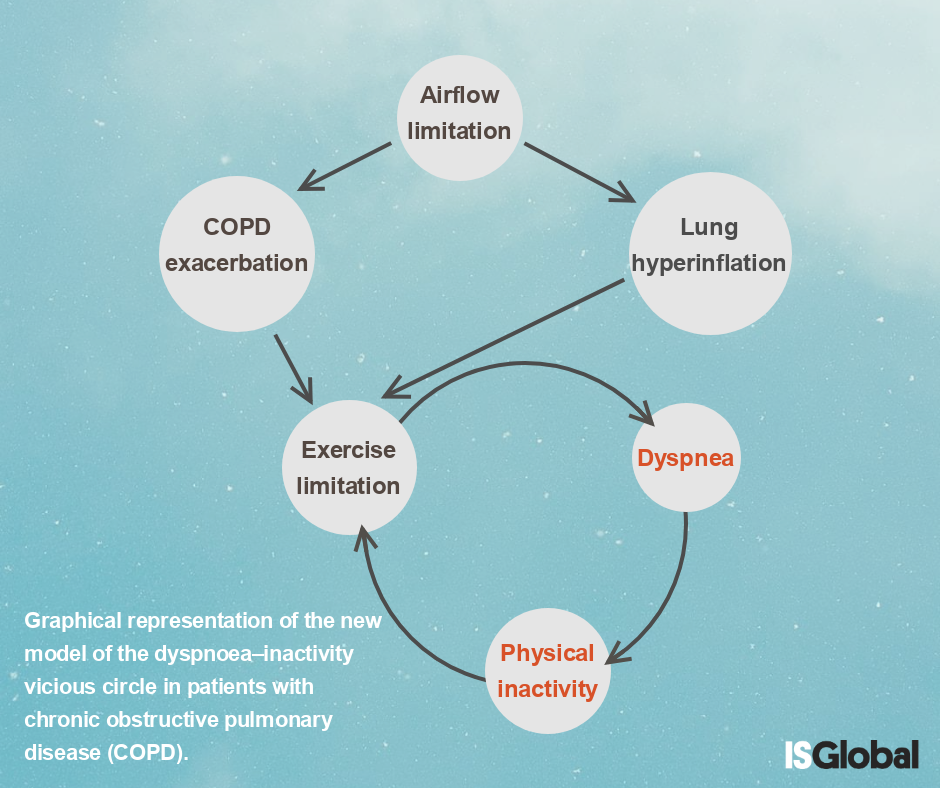 In the study “The dyspnoea–inactivity vicious circle in COPD: development and external validation of a conceptual model”, published in the European Respiratory Journal, the researchers identified and validated several versions of the vicious circle theory, which offered valid information about some aspects of the process but did not explain the concept in a complete and precise manner.

In contrast to previous nonvalidated models, the dyspnoea-inactivity vicious circle model developed in this study gives a more relevant role to exercise capacity and disease exacerbations and provides a better explanation of the clinical course of COPD. In the long term, the new model will help both clinicians and researchers to better understand the relationships among the COPD characteristics involved in the dyspnoea-inactivity vicious circle, thus facilitating the design and evaluation of targeted therapeutic interventions.