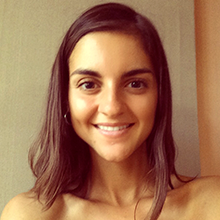 [Florence Gignac is student at the ISGlobal-UB Master of Global Health ] Okay, let’s face it. In 2017, traditional sources of funding...