Urban design can help promote physical activity and thereby improve citizens’ health and well-being. A new study by the Barcelona Institute for Global Health (ISGlobal), an institution supported by “la Caixa”, analysed the health and health-related economic impacts of the Besòs riverside regeneration project in the province of Barcelona (Spain).

Natural spaces in urban areas benefit citizens’ health and well-being. Studies suggest that green environments are associated with higher levels of physical activity. Although the impact of green spaces are better characterized than those of blue spaces – fountains, lakes, rivers or seaside accessible to citizens – a recent review of scientific literature also associates the latter with better mental health and well-being and with promoting physical activity.

The Besòs Riverside Park is a public space situated along the nine last kilometres of the river’s course, spanning the cities of Barcelona, Santa Coloma de Gramenet and Sant Adrià de Besòs. With a surface of 22 hectares, it is one of the largest public green spaces of the metropolitan area of Barcelona. Vegetation on both riversides is composed mainly by grass, with walking and cycling areas.

The new study, performed in the framework of the European BlueHealth project and published in the International Journal of Environment Research and Public Health, decided to measure the impact of this regeneration project on health and well-being.

On one hand, the researchers used a survey done by the Besòs Consortium in 2015 with almost 1,000 people to determine the main activities they performed in the park. They also used data from a counting campaign to estimate the total number of users per year. They developed the “Blue Active Tool” to estimate the impacts of natural spaces on health and health-related economic costs. 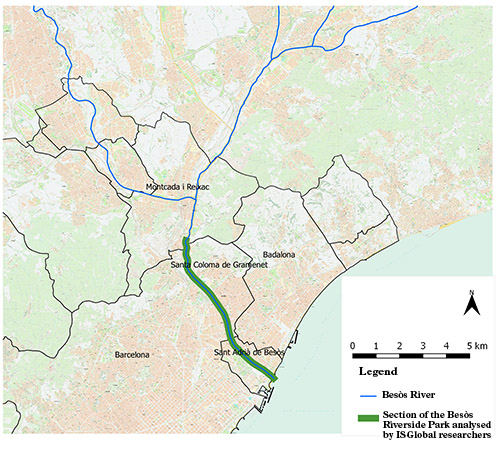 Results indicate that the physical activity performed in the park can help avoid up to seven deaths and six cases of different diseases every year, with dementia having the most cases avoided – one annual case in women and three in men. Altogether, the health-related economic benefits were estimated at 23.4 million euros.

Cristina Vert, ISGlobal researcher and first author of the study, explains “the Besós riverside park was developed mainly to improve the area’s ecology, but our evaluation shows that this intervention also translates into health benefits for the population that uses the infrastructure, through the promotion of physical activity”. This research “supports growing evidence for the health benefits of green and blue spaces, since the park combines both types of spaces”, she concludes.

The study estimates that the park attracts around 6,000 adults per day. The main activity is cycling – almost half of the users-, followed by leisure walking (38%); 12% are runners, while 1% walk for commuting.

Mark Nieuwenhuijsen, director of the Urban Planning, Environment and Health Initiative at ISGlobal, underlines that “the results show the impact of urban planning on public health: we should prioritize the regeneration of natural spaces in cities and facilitate their accessibility to maintain and even increase their use”.