If you are reading these lines, you surely have taken the challenge of answering the 10 'microscopic' questions about antibiotics and antimicrobial resistance, on the occasion of World Antibiotic Awareness Week. In order to dispel any doubts, we invite you to read a more detailed explanation for each question and follow some interesting links to go deeper into this issue. 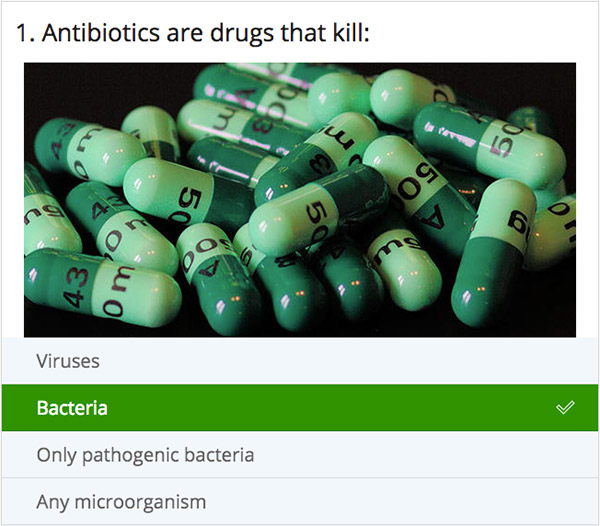 Antibiotics target molecules or processes that are unique to bacteria, regardless of their pathogenic potential. For example, penicillin inhibits the formation of the cell wall, a structure that is vital for bacteria but that other organisms such as viruses or human cells do not have. Other antibiotics interfere with metabolic pathways that are vital for bacteria but not for other microorganisms (for example, folic acid synthesis inhibited by sulphonamides). For this reason, antibiotics are only effective against infections caused by bacteria and not by other microorganisms such as viruses or fungi. 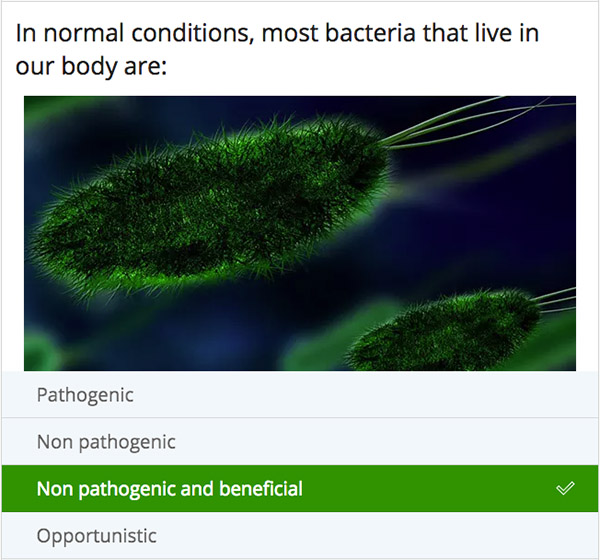 For each cell of our body, we host approximately 10 bacteria that live in perfect symbiosis with our organism and that form part of the so-called microbiota. Most of these bacteria reside in our gut, where they perform a series of vital functions such as “educating” of our immune system, nutrient metabolism, and protection against pathogenic organisms. When we take antibiotics, the problem is that we not only kill the “bad” bacteria causing the infection but we also kill the “useful” bacteria in our gut. 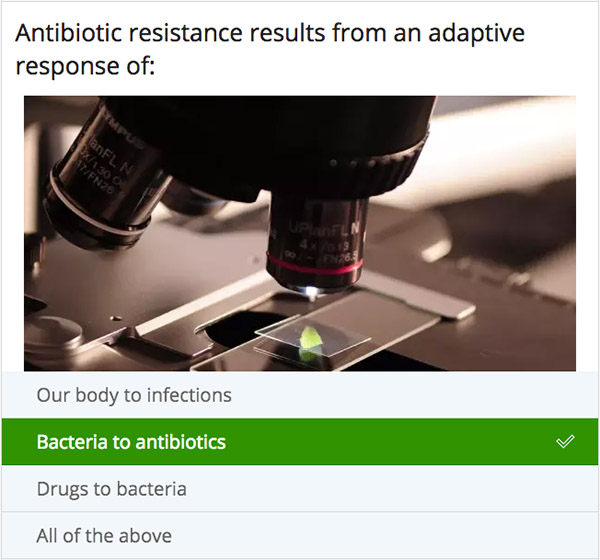 It is not the people that become resistant to antibiotics, but the bacteria, by changing in some way that reduces or eliminates the effectiveness of drugs. When bacteria become less susceptible to the effects of one or more antibiotics, it becomes necessary to use more aggressive – and toxic – drugs to eliminate them. 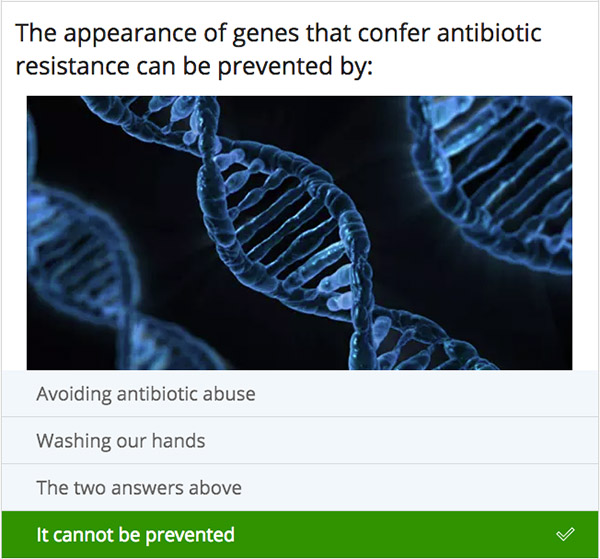 Bacteria divide very quickly and because of this they can accumulate a high number of random mutations in their DNA. Many of these mutations are lethal but some can confer them a selective advantage when growing in the presence of an antibiotic (for example if the mutation results in structural changes of a protein targeted by the antibiotic). Therefore, the appearance of genes that confer resistance to different antibiotics (both natural and synthetic) cannot be prevented. What we can control, by avoiding antibiotic misuse and abuse, is the selection and spread of such bacteria. 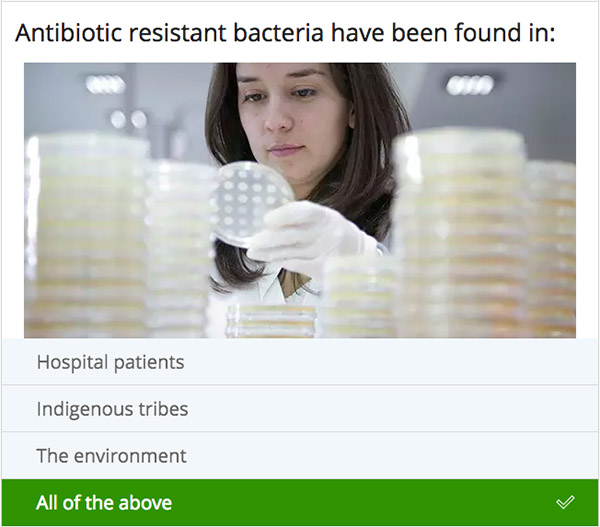 Antibiotic resistance genes have been found even in gut bacteria of Yanomanis, an isolated Amazonian tribe that had never been exposed to Western drugs or diets. This suggests that the Yanomani bacteria may have developed defense mechanisms against toxins or natural antibiotics that are similar to synthetic antibiotics. There are also a high number of antibiotic resistance genes among bacteria in the environment (water, soil, etc.), where they can exchange genes with other bacteria. Hospital and healthcare settings are a fertile ground for the proliferation of multiresistant bacteria, which represent a threat for patients in critical condition or with failing immune systems. 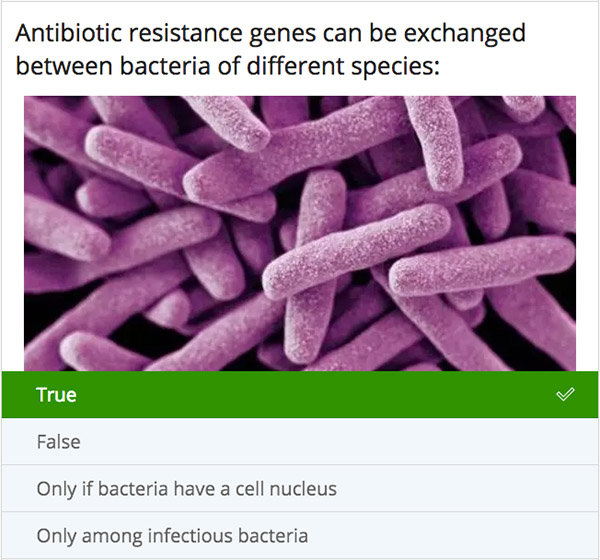 Bacteria can acquire antibiotic resistance through DNA mutations (as explained above) or through the exchange of antibiotic-resistant genes with other bacteria. Some of these exchange mechanisms can occur between bacteria of different species, whether free-living, symbiotic or pathogenic. All bacteria belong to the Prokaryote kingdom, characterized by the lack of cell nucleus. 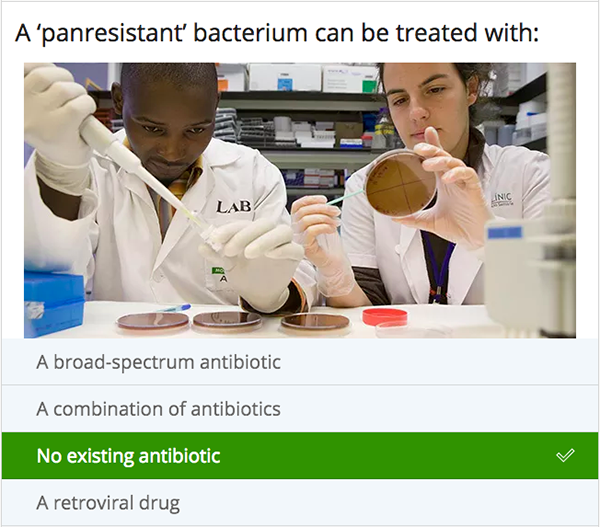 Bacteria resistant to multiple antibiotics (multiresistant or MDR), extensively resistant (XDR) and even resistant to all available antibiotics (panresistant or PDR) have been described over the last years. A woman in Nevada, USA, died last year because of an infection with a bacterium (Klebsiella pneumoniae) that was resistant to all antibiotics available in the US (i.e. 26 antibiotics)! Even if these extreme cases are still rare, antibiotic resistant bacteria cause an estimated 25,000 deaths per year in Europe and 700,000 worldwide. If nothing is done, this number could rise to 10 million by 2050, which means more than the current number of deaths by cancer. Antibiotic resistance is a global problem of public health.

Certain molecules derived from other organisms, including bacteria, have been found to have a powerful bactericidal action. Bacteriophages are viruses that exclusively infect bacteria, and represent an attractive strategy for the treatment of certain bacterial infections. A completely different approach that consists in replacing whole populations of bacteria are fecal microbiota transplants (from a healthy donor), has been successfully used to treat patients with recurrent infections by Clostridium difficile, a bacterium that causes severe diarrhea. 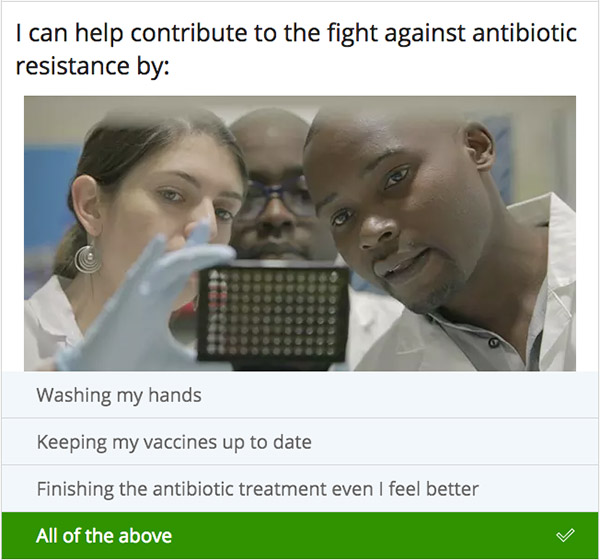 Washing your hands before handling food and after using the restroom, keeping vaccinations up to date (particularly for those that prevent bacterial infections), and finishing the antibiotic treatment as prescribed by the doctor are easy and cost-effective behaviors that, if we all follow, can greatly contribute to keeping the rise of antimicrobial resistance in check. 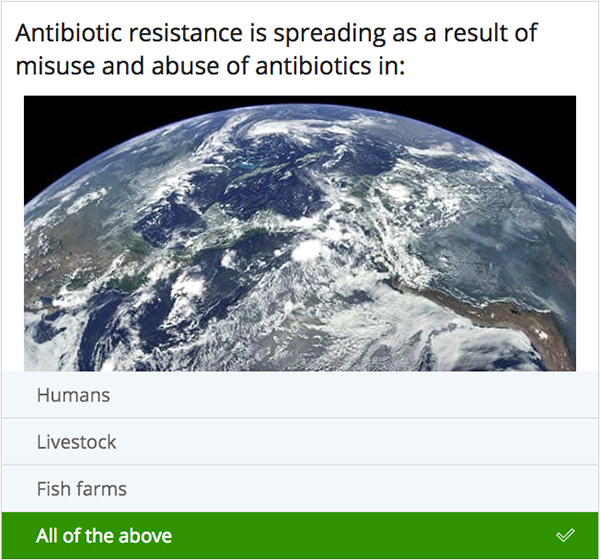 Frequently, people that feel ill and suspect they are infected go directly to the pharmacy to get an antibiotic, or they interrupt the antibiotic treatment as soon as they feel better. These are bad practices that contribute to the spread of antibiotic resistance. But a great contributor to this problem is the excessive use of antibiotics to prevent or treat infections in livestock for human consumption and in fish farms. This also favors the uptake of resistant bacteria and antibiotics by our organism, as well as their dissemination in the environment through residual waters generated by the agribusiness sector.

To Learn More About This Issue: